Notes, Acknowledgments and Contributor Bios may be found at the bottom of this page. 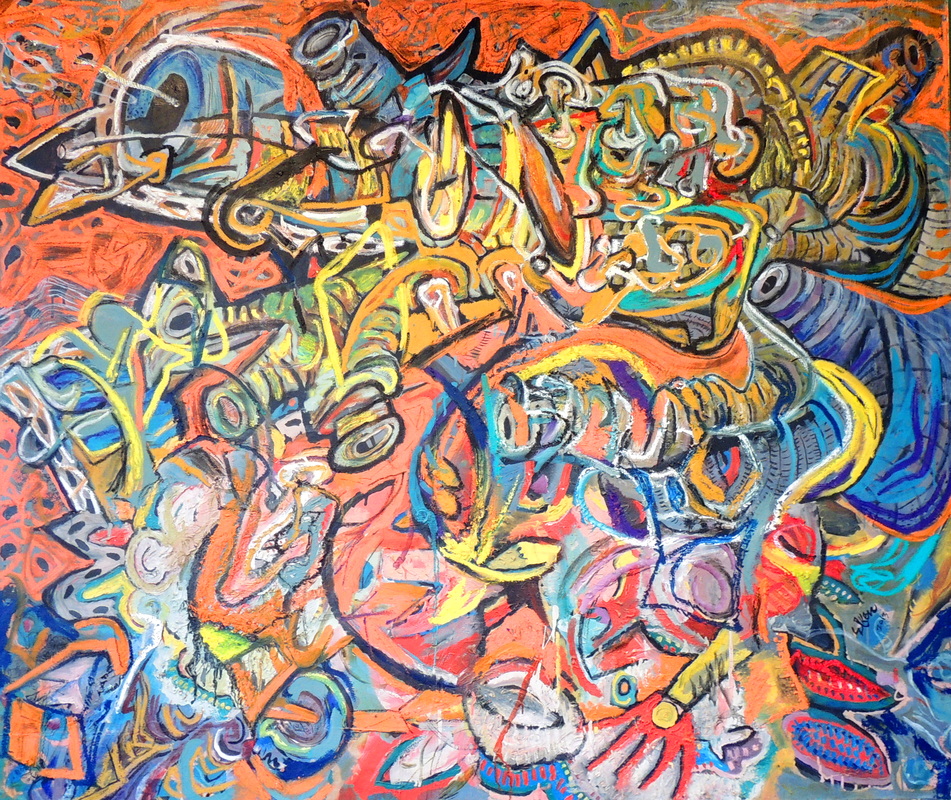 BROADSIDE #46: ADORATION OF THE COCK

BROADSIDE #42: WHAT WE CRAVE

BROADSIDE #40: MY DAYS ARE WIND

BROADSIDE #30: AND NOW FOR THE READING OF THE WILL

BROADSIDE #29: ON THE PERFECTION OF MAY

BROADSIDE #26: MY NAME IS DILAWAR

BROADSIDE #21: DREAM OF THE DOGWOMAN

BROADSIDE #18: THE NARCISSUS OF FAIRMOUNT

BROADSIDE #14: THE VESUVIUS OF AMHERST

This broadside was published in the Summer 2016 issue of Third Wednesday, a Quarterly Journal of Poetry, Prose and Art. ​For more information, go to: http://thirdwednesday.org

BROADSIDE #5: EL AND THE ART OF ESCAPE

Broadside 2:
"American Tom"
11" x 17" Broadside
Oil paint with text imaged on digital performance space
This piece takes as its topic the so-called "extraordinary rendition" program operationalized by the George W. Bush administration to transport prisoners to "black sites" around the world for the purposes of interrogation and torture. For more information on the program, please visit:

Broadside 3:
"American American"
11" x 17" Broadside
Lithograph with text imaged on digital performance space
This piece was inspired by listening to the constant barrage of "tactical shooting" ads on right-wing radio stations currently running nonstop in the United States. The spots emphasize the critical importance of owning assault weaponry that can be self-assembled and outfitted with silencers to prevent ear damage from muzzle blasts. One only has to imagine the ideal vacation for the ideal listener of these ads to realize one of any number of telling narratives.

Broadsides 12 and 13: ​
"Psalms for Babylon"
11" x 17" Broadsides (2)
Ink on paper with text imaged on digital performance space
​Many of the italicized phrases in these two pieces are taken from the 2005 Inaugural Address of George W. Bush. For a complete text of the speech, please go to: http://www.presidency.ucsb.edu/ws/?pid=58745.

Broadside 22:
"Valse Triste"
11" x 17" Broadside
Ink on paper with text imaged on digital performance space
This broadside takes as its topic the Pentagon-directed torture of detainees at Abu Ghraib Prison in Iraq from 2003-2006. For more information on detainee abuse during this period, please go to: http://www.nybooks.com/articles/2004/06/10/torture-and-truth/.

Broadside 23:
"Or"
11" x 17" Broadside
Ink on paper with text imaged on digital performance space
This piece was created in response to a Facebook posting by Irish singer-songwriter Richie Healy. The posting, uploaded on May 15 at 1:29 a.m., read: You play past the pages of who might have spoken, tears of living ride a brave sunset, knuckled seat with no looking back, river dreamers slide awkward smiles to your blindside disappearance, velvet remembrance marked your time.

Broadside 24:
"Seine/Celan"
11" x 17" Broadside
Oil pastel, gouche and colored ink on paper
with text imaged on digital performance space
This piece explores the assonance between "Seine," "Celan" and "Sela." Seine, of course, refers to the River Seine in Paris, Celan to Paul Celan, the poet, who committed suicide by drowning in the river on or about April 20, 1970. "Sela" derives from a Hebrew word often occurring in the biblical Psalms and may be a musical instruction indicating a time to pause or rest. Celan's mother who is referred to in the piece perished in a Nazi internment camp in Transnistria Governorate. She was shot after being exhausted by forced labor.

Broadside 25:
"Pothos"
11" x 17" Broadside
Oil pastel, gouche and colored ink on paper
with text imaged on digital performance space
In Greek mythology "Pothos" was the god of sexual longing, yearning and desire. He was also one of the winged love-gods known as Erotes. Pothos also carries with it other connotations, especially of deep regret for the loss of what never in fact existed. Here Pothos is presided over by an decidedly female dominion. As a place, it is a personal Inselwelt of the Mind, a world-island of endless love and longing for whatever is exciting and fantastical.

Dilawar, also known as Dilawar of Yakubi, was an Afghan taxi driver who was tortured and beaten to death by U.S. Army soldiers at the Bagram Collection Point, a US military detention center in Afghanistan. For more information about Dilawar, please read Richard Leiby's review of the film "Down a Dark Road," published on Friday, April 27, 2007 on the Washington Post website or, even better, see the film.

This piece attempts to imagine the piano improvisations of Emily Dickinson. One such performance was witnessed by Kate Scott Turner while visiting Amherst in 1859. Kate is the "Maid in black" referred to by Dickinson in a letter to Kate (Letter 209), a woman Emily called "Condor Kate" and a fellow habituée in "distant crags." Kate would never forget what she heard.

“North Farm” refers to a farm situated in a liminal zone between the ordinary world and hell. The idea of this place, also called Pohjola, originates in THE KALEVALA, the national epic poem of Finland, consisting of nearly 23,000 verses divided into 50 songs. North farm was famously the subject of John Ashbery's poem called “At North Farm” where a messenger of love – and also fate – is on his or her way to the reader but never arrives. This broadside deconstructs Ashbery’s poem by first excising the indefinite pronouns, stanzas and questions, then evaporating the separation in space and time between the messenger from North Farm and us. In this piece we become the messenger to ourselves as is currently the case with over 5 million Americans suffering from Alzheimer’s disease, a prevalence rate expected to triple by mid-century, barring medical breakthroughs that result in the cure or prevention of the disease.

ACKNOWLEDGMENTS
Thank you Joseph Brodsky (wherever you may be) for your inspiring visit to our high school in Ann Arbor. It was an honor to publicly read English translations of your poems.

Thanks to the Arts Foundation of Michigan and the Michigan Council for Arts and Cultural Affairs for a grant that supported the writing of earlier drafts of several pieces included in this broadside collection.

Jacques Karamanoukian (1940-2002) was born in Paris, France and studied at the Sorbonne. Karamanoukian was an Art Brut artist, teacher, promoter and exhibitor of the work of many influential artists in the United States and France. The first posthumous collection of his work, Jacques le Karamanoukian by Gérard Sendrey, was published in France in 2004.

John Elkerr has widely exhibited his work in galleries across the United States and in France. Reviews of his work have appeared in Décharge Art and Literature Magazine, the Detroit Free Press, Detroit Monthly, Metro Times, and the Ann Arbor Observer. His work is curated in the Musée de la Création Franche, Bégles, France. The upcoming cover of Third Wednesday will feature his work in collaboration with Karamanoukian. Mr. Elkerr lives in Dexter, Michigan.

Stephen Eric Berry is a recipient of a Jule and Avery Hopwood Award at the University of Michigan, a creative artist grant from the Michigan Council for Arts and Cultural Affairs, and he has been a finalist in the Yale Series of Younger Poets. His work has appeared in Salamander Magazine, Southern Poetry Review, No Exit, Visions International, and the California State Poetry Quarterly. An upcoming issue of Third Wednesday will include new work by Mr. Berry. He lives in Chelsea, Michigan.